Temple for an Alphabet 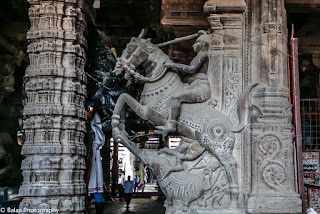 In Indian languages, there are long and a short sounding versions of vowels including the vowel "A". The alphabet "A" represents Shiva, per Siddhar texts. Shiva is the universal being. Its long sounding equivalent, namely, "aa" represents the glory of the universal being. The vowel "aa" is the shortened form of the word "Atma", the individual being. There is a unique temple for Shiva who is the conglomerate of individual beings. This is one of the only two temples without an idol within the Sanctum Sanctorum, the central chamber. This is a reminder to the fact that the Atma can not be seen or perceived by our senses.
The Aavudaiyaar temple, was built by the chief minister of the King of Madurai, some four hundred years ago. This minister in his previous birth was a Siddhar. Siddhars made use of herbal and mineral formulations to advance quickly in their Yoga practice.  Our Siddhar too used a Kuligai, a magical tablet formulation, to raise his Kundalini energy to the crown Chakra. The crown chakra is known by different names one of which is Kailasa. The Siddhar was spiritual practice and needed to make use of one more Kuligai to advance his energy to Kailasa. The story version about this Siddhar is better known.
Shiva took the Siddhar to the doorway to Kailasa, his abode. The Siddhar looked for the last Kuligai which he had carried with him to use at the doorway. The Kuligai had slipped and fallen down. It was on the terrace of the King of Madurai. The Siddhar returned to the earth to claim his Kuligai back. The King wanted a short visit to Kailasa in return for the Kuligai. The Siddhar had to consent. Bits of special gold which causes Kailasa to shine, became glued to the King's staff which lay on the ground when the King walked around in Kailasa. This gold went back with the King to his treasury. The Siddhar was obligated to return this bit of Kailasa to Shiva.
Centuries passed. The Siddhar was born as the Chief minister of the then King of Madurai. Shiva came in the form of a Guru to rekindle the minister's memory. The minister used 12000 gold coins from the royal treasury to construct a special Shiva temple.  The enlightened chief minister wrote the "Thiruvaasakam" Tamil text. The chief minister gained the name "Manikka-Vachagar". Tamil households continue to revere this work and the dramatic incidents related to Manikka-Vachagar.
Shiva's consort is worshipped in the Aavudaiyaar (ஆவுடையார்) temple, the temple built by Manikka-Vachagar, as "Yoga-Amba". She too is worshipped in her formless form. Every element of the architecture of the temple and its customs reminds us of Siddhar tradition from centuries earlier. Aavudaiyaar (Avudaiyar) temple is a splendid reminder of the way in which the spiritual beliefs of Yogis, Rishis and Siddhars from centuries earlier came to be preserved in the form of temple traditions. A temple like the Aavudaiyaar temple reminds an advanced spiritual practitioners to revisit the earlier roots of the Indian civilization.