A spider is known for its visual acuity. Spiders have a unique pair of eyes, one among several pairs of eyes, which can act like telescopes. Nature has endowed a spider with another amazing faculty in the form of its web. The web acts like a field of vibration. It enables a spider to "sense" the location of its prey with precision. It grants a spider sovereignty over its own web. 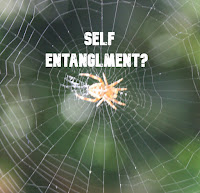 Human consciousness too has two facets, namely, (a) perception which is anchored to the five senses and (b) the ability to sense with the help of feelings. The education system today is designed to develop the former. Sensory skills however squeeze our consciousness into a narrow field of perception. The spider's precise binocular vision too is narrow. Developing the skill to know without the help of the senses is important to tap into the full power of consciousness.
Vedic texts call these two facets of awareness as "Buddhi" and "Bhava". Both are needed to gain freedom. Either of them can create entanglement without the presence of the other. Entanglement is not self-inflicted per Vedic texts. It is the mischief of Varuna, the Deva of waters. Varuna is depicted as holding a Pasha, a symbol of entanglement. The proverbial "wink" of Varuna is a reminder for the easier way to gain freedom from entanglements, namely through Surrender to the higher powers. 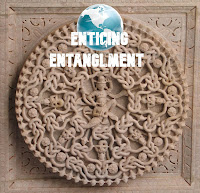