Vedic year begins, per a long standing convention, at or after the spring equinox. The spring equinox has shifted several days from where it was during the time of the great kings of the Vedic civilization. At present, the Sun enters the constellation of Aries (sidereal), 24 days after the spring equinox. Ancient astronomers in India knew about the precession of earth's axis and the resulting shift in the start of seasons. A tradition of adjusting the calendars every few centuries was in vogue for a long time. Transitioning from one convention to a new one is always a challenge.

Spring equinox coincided with the entry of the Sun into the constellation of Aries in 490 CE. The kings of the Gupta dynasty then ruled over the city of Avanti or Ujjain, the astronomy capital of the Indian subcontinent. Great astronomers like Aryabhata and Varahamihira presided over the astronomical observatory in Ujjain. They, especially, Varahamihira challenged the dogmatists who favored less scientific ideas about time cycles. Several astronomers had grown lax with rule of thumb calculations. They had forgotten that seed values or Bijas in formulae for plenetary orbits had to be updated based on new sky observations.

A major revision to a 60 year cycle based on Jupiter-Saturn conjunctions is attributed to astronomer Varahamihira. Varahamihira shifted the starting point of the table by 26 entries! Varahamihira was also likely instrumental in shifting the start of the Vedic year to Mesha-Sankranti or the first point of Aries. Aryabhata, the younger contemporary of Varahamihira notes in his work that the Mesha-sankranti was set in 490 CE.

Modern astronomers attenpted to standardize the difference between nir-ayana (sidereal) and sa-ayana (tropical) zero points of Aries, as soon as India gained her independence from the British. A lot of knowledge base was lost during the long gap of fifteen centuries. One camp of astronomers doubted that the last change had happened in 490 CE. They suggested 285 CE instead. Their logic was that the star Spica must have been one of the most important of the bright stars which ancient astronomers used for observation based corrections. The first point of nir-ayana (sidereal) Aries, per tradition, falls 180 degrees across from the Yoga-tara (observational pivotal star) of the eclipical arc named "Chitra". Lahiri, the leader of this camp, was influential because of his close friendship with Pandit Nehru, the then PM of India. Modern Vedic astronomy tables are now based on Lahiri's proposal. But, could a new convention for the start of spring come into acceptance in 295 BCE without a strong minded astronomer like Varahamihira? Table showing close encounters between significant planets in Vedic astronomy (Using CALSKY software) 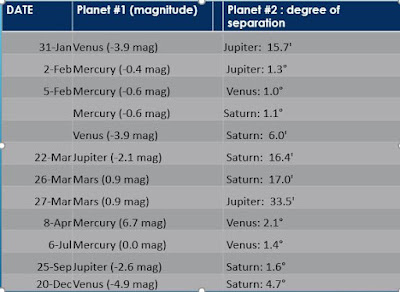