Inside and Outside - in the case of a Tree 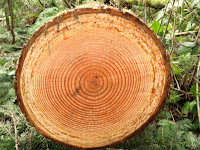 The idea of inside and outside is clear in case of human beings. A tree may not agree with this idea of the inside and outside. Scientists call a cylinrical layer of cells which is inside the bark of a tree to be its "Vascular Cambium". Scientists have recently identified this layer to be no wider than the tip of a needle. These cells are like the human stem-cell. Some of them turn into tree bark cells. Others turn into xylem or the real wood cells. A tree is valuable as a building material because of the xylem cells.

There is "thin" intelligence inside a tree. This decides if an inidvidual cell will grow inward (xylem side) or outward (bark side). The trunk and branches of a tree widen as the tree begins to grow. The cylinder of intelligence keeps widening. Ancient seers said that living entities are a combination of matter and intelligence.

The creative force in a forest can be pictured as hundreds of thousands of cylinders. The earth awakens this force in every germinating seed. Then it supplies the atoms to manifest a tree from the seed. The energy from the Sun plays a big role in the process. The phrase "mother Earth and Father Sun" gains more meaning in the context of what scientists call as the Vascular Cambium.