A Halloween Episode from Ramayana 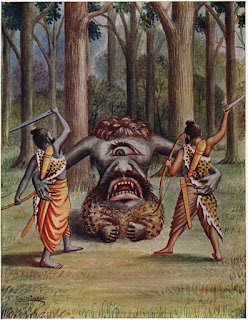 Kabanda episode is an important one in the Ramayana. Kabanada, a Rakshasa captured Rama and Lakshama while they search for Sita in Dandaka forest. Kambanda grabbed them with his really long arms. The two brothers were deparate for a clue about Sita when they encountered Kabanda. They found Kabanda without legs with his face in his torso. Kabanda had survived for ages only because of a divine blessing. The blessing allowed his arms to stretch for miles. Rama and Lakshama decided to chop off Kabanda's arms to free themselves from the monster. Kabanda told the brothers that as a Rakshasa his life can end only if his body was buried. He promised to provide a hint about Sita! There is a bit of hidden facts about rebirth in this story.

How does a Torso of a Rakshasa speak in human language? We encounter other examples of lower order beings communicating with humans in Puranas. Patanjali covers the topic of the ability of lower order beings to communicate with humans in his treatise called Patanjala Darshana. Patanjala Darsana discusses the question of a soul migrating from a human or higher form human to a lower form. A soul carries Samskaras from one birth to the next. Samskaras include linguistic impressions. A being's intelligence may be either partly or wholly lapsed per the strength of Samskaras from its earlier life. Its audiable language (Dhvanyātmaka) can be a partly veiled human language (Varṇātmaka). Texts such as this will fascinate even those who don't believe in rebirth. Indians researched on the topic of consciousness with scientific rigor.

Kabamda story is a study on this. Kabanda was a Gandharva in his earlier life. He took the body of Rakshasa because of a curse. Kabanda did not have the ability to communicate the hint about Sita because his intelligence was muted. Gandharva intelligence in him recognized that Rama was in search of his wife. Kabanda got his original body when Rama and Lakshama buried his Rakshasa body. He then asked Rama and Lakshmana to go meet Sugriva and other monkeys.