Was Vikramaditya a Shatavahana king?

I have wondered for sometime about how historians managed to merge the persona of the Great King Vikramaditya with that of another historical figure six centuries after his time. Sanskrit texts list King Virkramaditya to be part of the Parmar Dynasty (of Raja Bhoja fame), an off shoot of Agni Vamsa. The other king on whom historians have conferred the aura of the legendary Vikramaditya belongs to the Gupta dynasty. My wonder deepened when the results from the recent archaeological excavations at Lumbini, Nepal, concurred with Sanskrit texts that Buddha lived 200 years earlier than what historians have agreed on. Two centuries of Indian emperors are now missing, which surely must include the original Vikramaditya!

Unfortunately it is not easy to stumble upon evidence about alternate history of the Indian subcontinent by googling. I came across two interesting postings related to the Shatavahana kings whose erstwhile capital is currently under the threat of being flooded by the construction of a new dam. Historians had earlier concluded that the Shatavahana kings who ruled the territories of Andhra Pradesh were Buddhists. The results from more recent excavations run contrary to that belief. They show the Shatavahana kings as supporting Vedic rituals. The plot thickens further as coins from a Shatavahana king, Satakarni-I who lived right before the start of the common era bear the symbol of the city of Ujjain. He conducted two Ashvamedha Yagyas according to stone inscriptions. 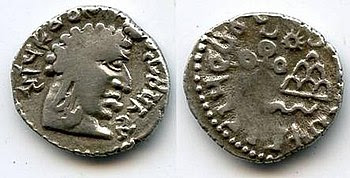 Coins issued by a famous descendant of Satakarni-I, the historically recognized king, Gautamiputra Satakarni, again shows the symbol of the city of Ujjain. The tamil text written on it in Brahmi script is a strong suggestion that the Shalivahana calendar era prevalent in the South got named after him. It is lot more logical that the Vikrama Samvat era prevalent in the North was named after his ancestor and not a Gupta king several centuries later. Historians, especially from India, can take clues from modern excavations and update history books, sooner than later.