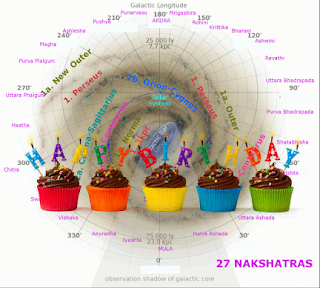 One's birthday as per the conventional calendar is only a crude approximation of the configuration in the sky when one was born! Tropical dates identify the position of Earth with respect to Sun ignoring the background of fixed stars. In a sense it distances our awareness from the wider cosmos by limiting it to a Heliocentric existence. While the complex molecules that make up our cells may have formed within the Solar system, every atom of our body was created in deep space out there!

Astronomers use the term "sidereal" to distinguish observations against a stationary background. A sidereal year is slightly longer than a tropical year. Vedic civilization recognized this and included the notions of tropical and sidereal in its calendar system. This calendar system utilizes the position of the moon as an additional peg to mark one's birth cosmically. Moon too returns to its original position against the fixed stars and is close to its original phase on one's sidereal birthday. For example, a person born on a full moon day may find new moon on his tropical birthday but not on the sidereal birthday.

A person's sidereal birthday is marked by a person's "Nakshatra" which points to a division in the observational sky. Ancient Skies and Astronomy Now, dives deeper into concepts behind tropical and sidereal astronomy.

Moon serves as a metaphor to an existence that is derivative or a reflection of a primary entity. Moonshine is radiation from the Sun. Mind is an abstraction which exists while life force moves within the body. Mind is self similar to Moon in Yoga tradition. The moon arriving back in its original phase to its original position in the sky, in a mystical way, is a reminder of the birth of mind while the Sun, a metaphor for life force, returning to its original position is a reminder of the birth of body.