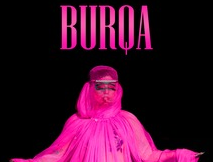 A track from Lady Gaga's recent album leaked on the internet has been causing quite a bit of stir among feminists, men and Muslim women. Lady Gaga has got critics wondering about the message of this particular track. Some are accusing Lady Gaga for sexualizing a garment that is a symbol of modesty.  Examples of disagreements about the utility and religious significance of the burqa even among the Muslim women and debates about facts and solutions for the "male gaze" are captured in the comments section of the associated article in WSJ.

Voters in one of Switzerland's districts (Ticino) approved the first ban on Burqa in that country. These voters claim that burqa is a barrier to integration. Activists, including Amnesty International, are claiming discrimination against the minority. Interestingly the Ticino district has a Italian speaking majority. 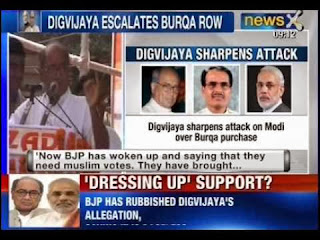 In India, Digvijay Singh a spokesperson for the ruling party accused the main opposition party, BJP, of purchasing 10,000 burqas to supply to volunteers at a rally to stage fake support from the Muslim community. His accusations became a comedy of errors, at least on twitter, when the shop keeper claimed that no burqas were ordered or purchased from his shop as alleged by Digvijay Singh.The Hindu newspaper has an article on the politics of burqa. Indian politicians set the agenda for media discussions around social topics with an intention to divert attention away from corruption charges. This burqa discussion may have drawn some "citizen gaze" away from the unconstitutional ordnance which the union cabinet passed to negate a corruption verdict issued by the Supreme Court.